The NorthStar Group & The Source Magazine 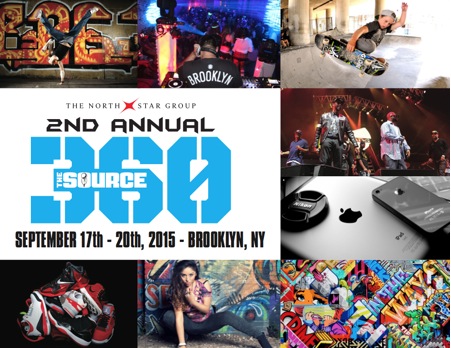 New York, NY – September 2, 2015 – Tickets are now available for the second annual SOURCE360 Festival, presented by The NorthStar Group and The Source Magazine. Purchase tickets here: http://bit.ly/SOURCE360tix. The upcoming SOURCE360 Festival, to be held in downtown Brooklyn from September 17th – September 20th, will feature over 20 activations to engage the community through music, sports, fashion, film/TV, art, dance, and technology. SOURCE360 is also focused on educating the youth and inspiring the community in numerous pro-social activations and programs. For more information, please visit: http://thesource360.com/.

SOURCE360 is more than a festival and hub of creative performances. Education and thought leadership is essential to the mission. One of SOURCE360’s goals is to increase awareness and interest in higher learning among middle school and high school students through the filters of music, film, fashion, sports, technology and the performing arts. The SOURCE360 Educate & Elevate program and Youth Training Day will expose them (especially at-risk youth) to information and opportunities relating to colleges, universities, career paths, corporations and community service organizations.

With excitement towards this year’s SOURCE360 festivities, founder of The NorthStar Group and The Source Magazine L. Londell McMillan explains, “Our goal is to network, spread the good word about the influential and positive role Hip-Hop can play and has played in society as well as to educate and inspire people of all ages and backgrounds to make positive contributions to the culture.”

We are accepting Press Requests for The SOURCE360 Festival. Press interested in receiving credentials should fill out this form and will receive a response closer to the event: http://bit.ly/SOURCE360Press15.

For more information and to stay updated on SOURCE360: